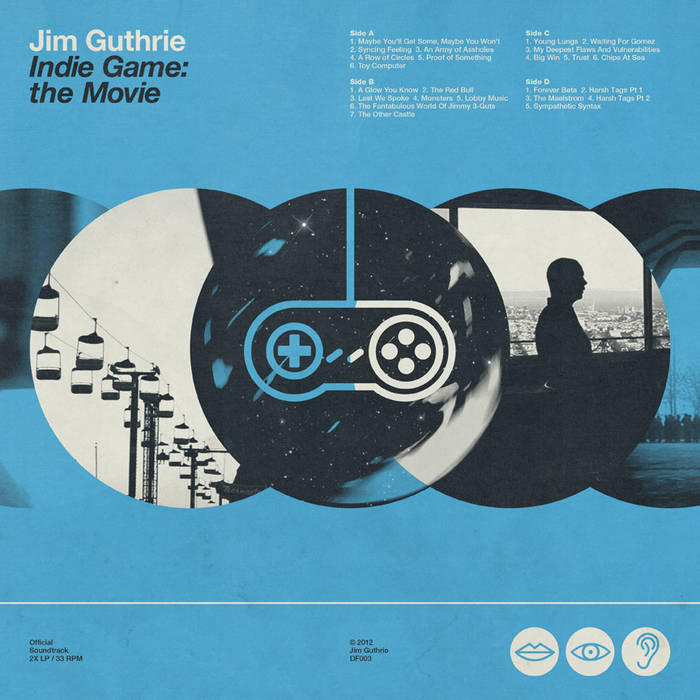 logusbogus The very album that introduced my pre-teen self to the wonderful world of Jim Guthrie, Indie Game: The Movie's soundtrack holds up far better than the film it was made for has in the eight years it's been since release.

In retrospect, a fair chunk of this album comes from Guthrie's first two albums, but this isn't a bad thing; those albums were great and the selections from A Thousand Songs are solid ones.

Picking Trust as my fav track because that's an all-time classic in my opinion. Favorite track: Trust.

Djtyme One of my favorite soundtracks of all time and I can finally have it on vinyl so freaking happy. Favorite track: Maybe You'll Get Some, Maybe You Won't..

Original music by Jim Guthrie that appears in or is inspired by Indie Game: The Movie. A film by James Swirsky and Lisanne Pajot www.indiegamethemovie.com @indiegamethemovie

'The Fantabulous World of Jimmy 3-Guts' and 'Trust' originally appear on the album 'A Thousand Songs' jimguthrie.bandcamp.com/album/a-thousand-songs

'The Maelstrom' originally appears on the album 'Sword & Sworcery LP: The Ballad of the Space Babies' jimguthrie.bandcamp.com/album/sword-sworcery-lp-the-ballad-of-the-space-babies which is the OST to the game S:S&S EP available on fine apps stores everywhere!

All music and words by Jim Guthrie @jampants - jimguthrie.org. Recorded and performed by Jim Guthrie. Mixed by by Jim Guthrie and Justin Nace. Mastered by Andy Magoffin at The House of Miracles. Evan Gordon played bass on 'Army of Assholes' and Randy Lee plucked the violin on 'Proof of Something'.. Oh yeah, I should also mention that it's just not possible to sequence this much music so it flows from song to song nicely. Even if I could I certainly don't expect people to listen to it in one sitting. Feel free to make shortened playlists that turns the album into three of four EPs or something. Sorta like a 'choose your adventure' but with an album, ya know?

THANK YOU James Swirsky and Lisanne Pajot - you guys are so good at what you do. Thanks to everyone who supports indie art and artists.  Biggie props and shout-outs to my peeps at Capy and Queasy games and Superbrothers Inc. Also huge thanks to Justin Nace and Andy Magoffin - you have sexy ears.